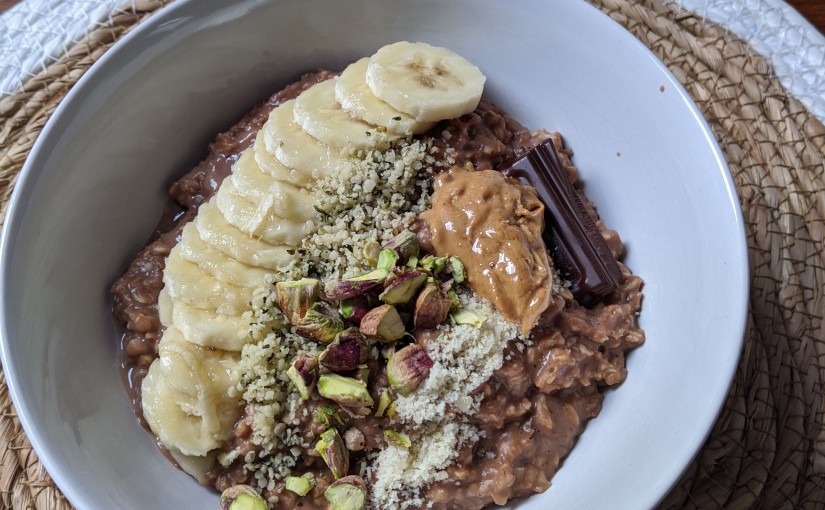 I used to think of porridge as a gluey, tasteless and boring type of breakfast that you eat to be healthy, but don’t really enjoy the process of eating. How mistaken I was! You can make your porridge healthy, nutritious, tasty and beautiful-looking by adding some plant milk and other toppings. If you’re looking for some recipes to take your porridge to the next level – read the blog post below! I promise this article is very informative and educational and you won’t look at porridge in the same way ever again!

What milk is best for porridge?

In my opinion any type of milk is better than water in porridge as it simply gives it a creamier texture. Most of us know that plant milk is much better for your health than cow’s milk, however there are some drawbacks to it as well. I’ve tried many different types of plant milk in my porridge, but also read about its impact on the environment and here are my thoughts on it:

Coconut milk goes well with different kinds of berries, especially strawberries and raspberries; cashew and almond milk are nutty and creamy milks which go well with bananas and different kinds of nuts. However (!) please be aware that the above plant milks are unfortunately bad environmental choices. Producing coconut milk on a global scale leads to the exploitation of the poorer communities in which it grows; almond milk production exploits bees (which pollinate almond trees); cashew nuts have to be peeled from their skin which contains acids and many workers who peel them experience hand burns. You can read about the plant milk industries here and here.

Hazelnut milk is my ultimate hero. It’s creamy, nutty, naturally sweet and most of all good for the environment, because its trees are pollinated by the wind, not bees. You can use soy milk if you want to add protein to your porridge, just make sure you choose an organic one. Oat milk is not my favourite kind of plant milk as it’s kind of watery and not as creamy as hazelnut milk, but it’s the most sustainable option out of all plant milks.

I don’t think it’s wrong to drink almond or coconut milk from time to time, but if you care about the environment try to choose hazelnut or oat milk more often to create a bigger demand for it.

What to put in your porridge

If you’re planning to eat porridge more often, I definitely advise buying the following ingredients which you can store in the cupboard/freezer and experiment with while creating your porridge recipes. They may seem expensive if you buy them all at once, but I promise they will last a long time!

Fresh fruit: bananas add a lot of texture and good carbs to your porridge and are great for carmelising as well; strawberries, blueberries, blackberries, pears, peaches (if in season), anything really!

Spices: use cinnamon to add sweetness; tumeric or kurkuma – super healthy spices to boost your immune system – create a beautiful golden colour in your porridge; maca powder (a yellowish root spice) doesn’t taste great in itself, but when added to milk is tasteless, and it’s full of iron to give you energy.

Nuts: pistachios, walnuts, almond flakes, coconut flakes, hazelnuts…whatever you like! You can caramelise nuts with some sugar/honey on the pan which will add lots of sweet crunch to your porridge.

Nut butter: this will add protein to your porridge. My favourite nut butter is cashew (which unfortunately goes against the environmental issue it causes).

Dark chocolate – if you add a slice of it to hot porridge it will melt delightfully.

The milk-oat ratio in your porridge will depend on the texture you like. I would say a bit less than 3/4 of a cup of oats to 1 full cup of milk is fine for me. Add a bit more milk if you find it too dry. I heat up the milk first in a pot and then based on what I have in the fridge add spices and ingredients to it. I am sure that if you add a pinch of cinnamon, some honey and your favourite fruit to your porridge, you’ll never go wrong, so let yourself be free and experiment. Here is one of my favourite recipes and some photos of other porridge bowls I’ve made for inspiration.

Heat up 1 cup of hazelnut milk with a teaspoon of cocoa powder (optional), half a teaspoon of cinnamon and 1 tablespoon of runny honey (manuka honey is the healthiest option, but unfortunately not the cheapest). Once it’s warm, add your 3/4 of a cup of oats and stir occasionally.

In the meantime, cut a banana either in small pieces (shown in the the picture above) or cut it in half if you want to carmelise it. To carmelise the banana, heat up a pan and spread a bit of butter on it. Fry the banana for 1 minute on each side. I normally cut some pistachios and almonds into small pieces and carmelise them with a sprinkle of brown sugar in the same pan in which I carmelised the banana.

Pour your oat mixture into the bowl and add the caramelised banana, one spoon of cashew butter and sprinkle with nuts. You can add one sliced strawberry for some colour and a ‘wow’ effect, plus a piece of dark chocolate 😉

I know it looks like a lot of work, but you once you get experienced in preparing your more advanced version of porridge, it’ll be a matter of 10 minutes maximum. You obviously can just throw the ingredients in the porridge without placing them evenly – the taste will remain the same, it just won’t be Instagrammable! I hope I managed to convince you that porridge does not have to be a boring breakfast, but an easy and quick way to an exciting start of the day!

Lifestyle and travel blog about Bournemouth. Places to see.Things to do. Food to eat. Slow and local life by Magdalena View all posts by Magdalena Rasmus