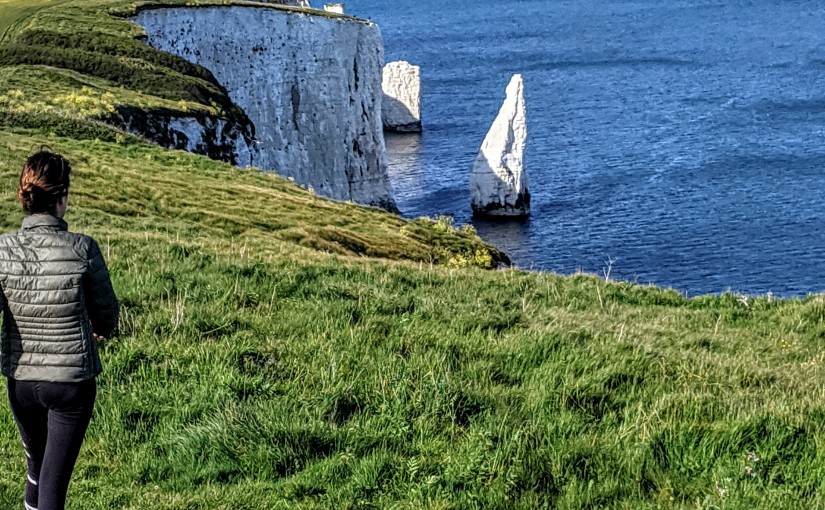 Recently we visited one of the most stunning beauty spots on the Isle of Purbeck in Dorset – Old Harry Rocks. The views from the cliffs were breathtaking and it made me feel a bit sentimental, as it reminded me of the walk I took last year from Old Harry Rocks to Swanage beach and back – you can read about it here. Last year, when everything was normal, we could finish the walk with a delicious meal at the Bankes Arms pub, but this time we couldn’t for obvious reasons (hello COVID-19!). Despite this obstacle, we had a fantastic time while walking, had a lovely home-made lunch on the cliffs, and simply enjoyed being in nature. In this blog post, I decided to answer some of the most commonly asked questions about Old Harry Rocks, all in one post! Did you know the answers beforehand?

Old Harry is the name of the single stack of chalk standing furthest out to sea. A local legend is that one of Poole’s pirates, Harry Paye, was always hiding his ship behind the rocks and waiting for merchants to buy illegal goods from him. Another legend says that the Rock was named Harry because the Devil slept on the rocks. Old Harry is in fact an informal name for Satan.

2. When was Old Harry Rocks formed?

It was formed 65 million years ago! The breathtaking rocks are part of the Jurassic Coast World Heritage Site and managed by the National Trust.

3. What is the distance from Old Harry Rocks to Swanage Beach and back?

It’s 9.6 miles (15 kilometres). If you want a fairly challenging walk, start your journey from Old Harry Rocks, walk to Swanage beach and back to the Rocks.

4. What happened to Old Harry’s wife?

Until 1896 there used to be another rock known as Old Harry’s Wife, but erosion caused her to fall into the sea. Poor Harry has been widowed for over 100 years!

5. How do you get to Old Harry Rocks from Bournemouth?

We drove from Bournemouth to Studland and parked our car next to the Bankes Arms pub. You can get there by ferry from Sandbanks or via Wareham, which seems like a longer drive but it actually takes about the same amount of time (approximately 50 minutes), and it does not include the time waiting for a ferry. If you want to go there by bus, take line 50. It takes 45 mins to arrive at the destination.

Have you ever been to Old Harry Rocks? If you haven’t, hurry up and visit poor old Harry. You never know when he’s going to tumble into the sea to join his wife.

Lifestyle and travel blog about Bournemouth. Places to see.Things to do. Food to eat. Slow and local life by Magdalena View all posts by Magdalena Rasmus

4 thoughts on “5 interesting facts about Old Harry Rocks and photos that will make you want to visit.”