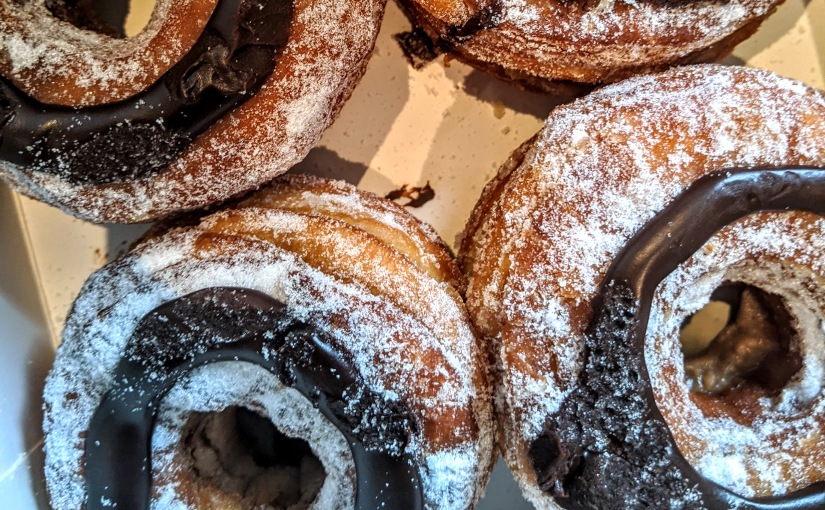 Apparently cronuts were a ‘thing’ quite a long time ago; the whole craze about them started in 2013 in New York. I didn’t know anything about them until last Friday, though. When I accidentally read an article about this combination of a croissant and a doughnut filled with flavored cream, my urge to eat one became unstoppable. Fortunately, I didn’t have to wait a long time and uncle Google directed me to a local patisserie in Poole – Mark Bennett – where you can order delicious cronuts online. Let me tell you why you should do it!

What is the cronut story?

I wouldn’t normally write a blog post about a donut, but the story behind the cronut is quite fascinating and I think you should know it too! Little did the cronut’s creator Dominique Ansel know that his original bake would make people queue at his patisserie in New York from 5am! Ansel’s bakery is opened from 8 a.m. and regardless of the weather, people wait patiently for hours to get a famous cronut. Turning up to the bakery at 8.30 requesting a cronut will result in an apologetic smile from Ansel’s staff. Dominique prepares only a limited amount of them according to his noble philosophy of ‘quality over quantity.’ Due to a huge success of the cronut, it was trademarked and its recipe remained unknown for a long time…

The cronut’s recipe was finally revealed in 2014 by Dominique himself and it turned out, not surprisingly, that it takes three whole days to prepare the croissant-doughnut hybrid! There are some simplified recipes available on the internet (here for example), and with so much time on our hands in quarantine, you could try to make one, but…it’s probably better to use this time reading books or something and instead support a local business in these difficult times!

A local patisserie in Poole, owned by award-winning baker Mark Bennett, offers artisan bakes, sandwiches and the famous cronuts delivered to your house, all done in keeping with social distancing rules. Please, make sure you call them (the phone numbers here) the day before you want to eat your cronuts, because they sell out quickly and are not available to hand! I had to wait 24 hours and it felt like eternity 😉

Coming back to the main topic of my article, the cronut from Mark Bennett’s bakery was crispy outside, fluffy and flaky inside and the nutty hazelnut cream that was in-between the layers tasted just heavenly. It indeed was like a hybrid of a croissant and a doughnut, but more towards the doughnut. I’m obviously not the right person to say if it tastes like the original New York cronut because I haven’t eaten one, but even so, I can reassure you Mark Bennett’s will become your favourite guilty pleasure.

The cronut’s story, its uniqueness and flavour made me want to taste it as soon as I found out about it. I hope you’ll be encouraged to order one and indulge in this little, simple pleasure of sweetness and crunchiness.

If you’re interested in finding out more details about cronuts, you can watch an interesting interview with their creator Dominique Ansel here.

My Life in Bournemouth
Blog at WordPress.com.