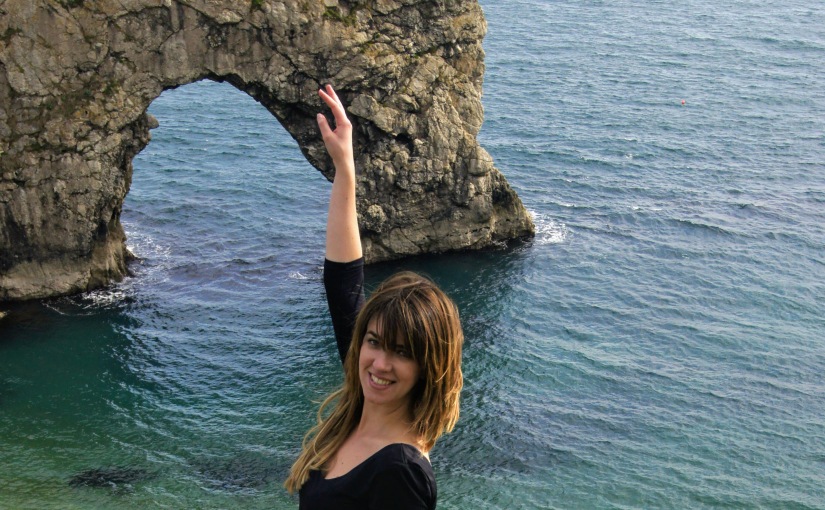 This is one of my favourite places to go at weekends. It’s simply fantastic. Both Lulworth Cove and Durdle Door are part of a long coastline called the Jurassic Coast. The structure of its cliffs, rocks and fossils can tell you the story of Earth across 185 million years! We had a fabulous time there, climbed a couple of cliffs (losing our breath a couple of times in the process), took loads of stunning pics, and rewarded ourselves with some comforting food in one of the restaurants.

Just admiring the beautiful landscapes of the Jurassic Coast is a pleasant and unforgettable experience, but when you realise that you’re standing on cliffs that have taken millions of years to be formed, it simply takes your breath away.

I bet the first association people have with the name Jurassic Coast is Jurassic Park. Yes, dinosaurs! They used to walk on these lands and you can still find plenty of their fossils lying on the beach, and for me, the thought of it makes the walk even more thrilling.

We started our walk from Lulworth Cove, which came into being because of a collision of continents, and continued towards Durdle Door. It is an iconic arch of limestone standing in the sea, making it a perfect spot for photos.

In my opinion, Durdle Door should actually be named Durdle Window since you can see beautiful turquoise water through it. It is like the Azure Window in Malta, which collapsed two years ago and left everyone heartbroken! Durdle Door is for English people what the Azure Window is for the Maltese – simply iconic. Can you imagine if Durdle Door collapsed into the sea? I can’t. The landscape of the Jurassic Coast would not be the same!

The beauty of this place is undeniable, but it can be dangerous if you’re not careful. There are high cliffs, strong winds and the tempting urge to get closer to the the edge to take a perfect selfie. Not advisable unless you want to feel like a god…

I know I have been complaining a lot about the exhausting walk up and down the Jurassic Coast hills, but believe me it’s worth it. Especially when you can reward yourself with some comforting food at one of the restaurants in Lulworth Cove. We chose the Lulworth Cove Inn – a cosy English pub selling fresh, local and sustainably sourced produce.

But if you decide to eat outside, be careful of voracious vultures….

Visiting the Jurassic Coast is a must if you live in or come to visit Bournemouth. It’s only a 45 minute drive by car and there are some travel agencies like Discover Dorset that can take you there as well. You can do a challenging walk and climb a couple of cliffs, but if you don’t want to get too tired, choose an easy walk from Lulworth Cove to Durdle Door! I hope this blog post and my photos have encouraged you to go there!