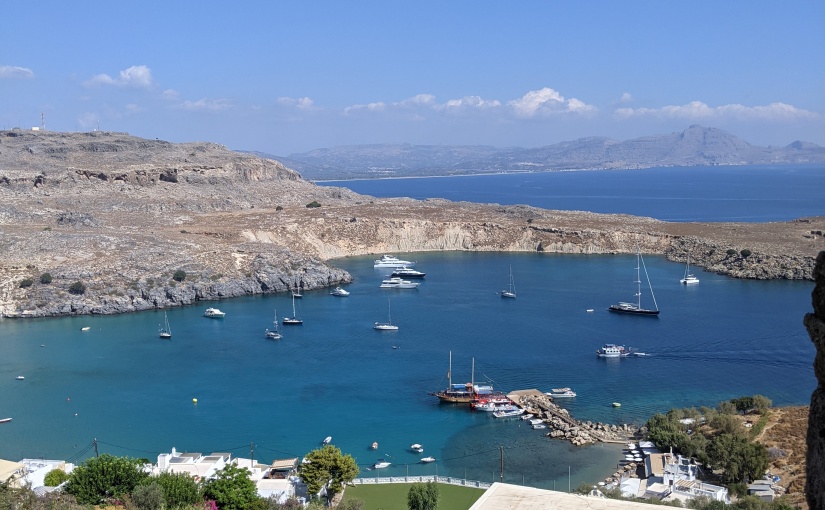 Travelling broadens your mind, they say, and it couldn’t be closer to the truth. Each time I visit another country, I try to remember something fresh and inspiring about its culture and cuisine. A new philosophy on life, a delicious new recipe, home design or architectural inspiration…it’s all so refreshing to your everyday routine and creates beautiful memories. Here’s what I learnt from my holiday on Rhodes, a Greek island.

Opa! Family, good food, generosity, dancing and singing are your “go for” things in life.

Opa is a widely-used Greek saying expressing joy, excitement and happiness. Greeks are family oriented people who love dancing and singing while having a big feast. What’s more enjoyable than these simple pleasures?

A Mediterranean diet and walking up and down the stairs will help you live longer.

I learnt that the inhabitants of Symi, a tiny Greek island close to Rhodes, have one of the highest life expectancies in the world. It’s mainly because their houses are built on the tops of hills, and the shops are at the very bottom. They can’t use cars because there are stairs everywhere (going shopping ain’t easy!). The fact that they eat a lot of fresh seafood and vegetables contributes to good health and wellbeing.

Can you use and drink water from the tap? Consider yourself lucky! Symi doesn’t have natural water supplies (they are transported to the island from Rhodes), and in the past, a lot of people emigrated to other islands because of easier access to tap water. Next time you have a shower, or use water for any other purpose, appreciate it a little bit more.

White is the ultimate winner.

Whitewashed houses are very common in Mediterranean countries. The main reason behind it is that a house that has been painted white can cool the temperature of the house by 10 degrees! Apart from this practical reason, white simply looks elegant juxtaposed with any other colour. If you thought that white was boring, just look at the photos below.

We think of modernity as something better than old-fashioned. Nothing is further from the truth. Old means full of soul and mystery for me. Just look at these shots…

Have you ever caught yourself doing too much or being too busy? Siga, siga – translated as ‘slowly, slowly’ – is a Greek saying to remind people to take it step by step. Cats chilling on the streets in Greece are a perfect example that shows we should simply slow down once in a while, take a nap, and maybe just lazily wander around.

!Why you should never use a donkey taxi!

One thing I didn’t like in Greece was tourists using donkeys as transport. I understand that it’s financially benefitting the locals, but putting people twice the size and weight of a donkey to transport them to the top of the hill is unacceptable in the 21st century!

While visiting Lindos, a popular tourist destination due to its historical Acropolis, I noticed a donkey taxi. You pay 7 euros to be transported on a donkey to see the ancient ruins. During peak times, donkeys are forced to carry people up and down the hill five times a day without access to water or the possibility of hiding in the shade.

Despite the fact that they shouldn’t carry more than 20% of their bodyweight, profit-driven owners allow obese people to ride them. It puts a lot of pressure on their joints and backs. When a donkey is too weak to carry people, it’s abandoned, because the veterinary treatment is too expensive.

I know it’s hard to walk in the heat and it’s more comfortable to ride, but if you ever have the opportunity to use a donkey taxi, think about what these poor animals have to endure…and make some effort yourself. Donkey taxis are definitely not one of the things I liked in Greece.

Every culture and country can teach us something valuable about life. The Greeks value family gatherings, traditions, good food, the little pleasures of life such as dancing and singing and slowing down every now and then. Have you learnt any valuable lessons while visiting another country?