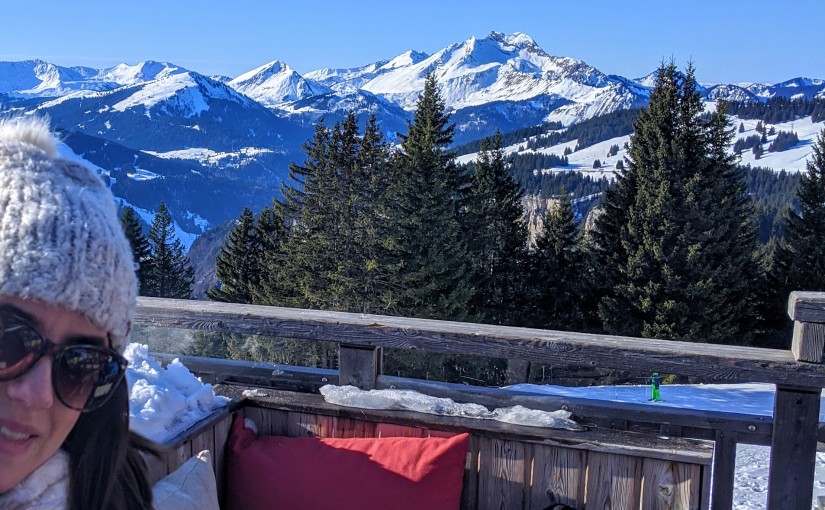 The area called Portes du Soleil is literally translated as ‘The Doors of the Sun,’ and it’s the second-biggest skiing location in the world. It will stun you with breathtaking mountainous landscapes, plenty of ski slopes of different levels of difficulty, charming wooden chalets and fantastic regional food. In this blog post, I’ll describe my first skiing experience – a one-week stay in the beautiful village of Chatel, which is a part of Portes du Solei, and, next week, a post about the comforting food I tried after skiing.

When choosing which part of Portes du Soleil you want to stay in, you should first consider your skiing experience. If you are a beginner, you should (or even must) look for an area with green slopes. It’s advisable to take lessons with a skiing instructor, but we didn’t. Instead, we watched a video explaining basic skiing skills and practiced for an hour on a little hill.

Blue pistes are for more experienced skiers (don’t trust the maps saying they are easy as some of them are not!), red ones are inclined and challenging and the black ones are for…the suicidal. Just kidding, obviously, but you must have a lot of experience to approach red or black slopes, so take it slowly and sensibly.

A very important thing to remember is not to be demotivated when seeing some 6-year-old kids overtaking you or skiing on the red and black slopes. They’re normally part of skiing schools and train every weekend from November to April. You also shouldn’t think, ‘Oh, if a child is going on this slope I can do it too!’ It’s misleading, because some of these children are real skiing masters!

If you’re a skiing expert, you can ski from one area of Portes du Solei to another by using gondolas (télécabines) and slopes encoded in different colours. If you look at the map below, its way of getting you from one place to another reminds me a bit the Underground map, and that’s the way you should read it.

Ben went everywhere on his skis, but because I was scared to use the blue and red slopes to get from Chatel to Morzine, we had to take our car to get to the green slopes in Super-Morzine, which took 45 minutes.

Chatel is appropriate for beginners with its green slope La Bellete, however it’s not the best one to start with because it’s quite narrow and curvy. If I were to choose again, as a beginner, I would have gone to a town called Morzine for a full week. The slopes in Super-Morzine (check the map) are wide, and I think I gained a lot of confidence there which is the key to improving your skiing skills. The video below shows a beautiful part of Super-Morzine

I felt so confident on Morzine’s slopes that I finally took to the blue pistes and eventually got to the Swiss part!

It’s apparently a pattern when you start skiing that one day you feel that you can conquer any green or blue slopes and the day after you think you’re like a starter again. This theory proved right in my case. Remember you’ll also experience tiredness and muscle stiffness after a few days of skiing which doesn’t help to see the improvement. Prepare yourself for some bruises!

If you don’t have your own equipment, skis, shoes and poles can be rented on the spot at special shops. The staff will help you to choose the appropriate ones for your weight and height. Our skis, shoes and poles were included in the price of a self catering apartment and tele-ski tickets. The tickets Ben bought for us allowed us to use all the slopes in Portes du Solei, but you can choose a smaller area which will be cheaper. Check the booking options here.

Other gear can be bought in Decathlon in the skiing section. I would suggest the following: a helmet, gloves, skiing trousers, and special blouses that keep you warm. Don’t forget about suncream protection, as the sun can be very strong on the top of the mountains, and lip balm – your lips get super dry on the slopes!

I hope my blog post explained what’s important to consider when going skiing for the first time. Portes du Solei was a real ‘Door to the Sun’ for us with one week of full sunshine and soft snow on the pistes, and despite some bruises, feeling of doubts, and tears, I am really grateful for the experience. My next blog post will explain everything about so-called apres-ski – things you can do after skiing – but I will mainly focus on traditional dishes. Stay tuned for mouthwatering photos of Fondue, Raclette and others!